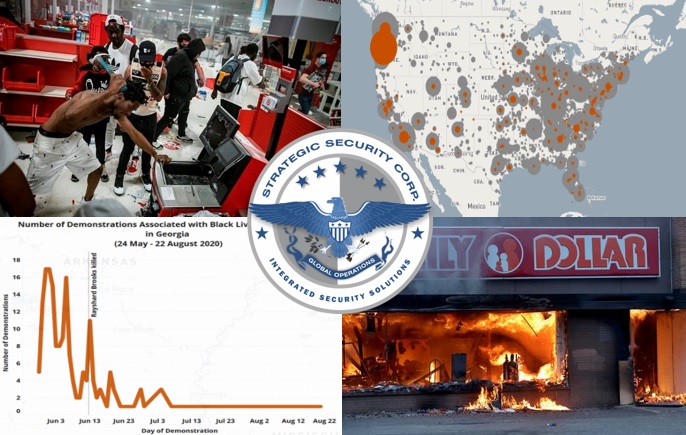 The United States is at heightened risk of political violence and instability going into the 2020 general election that is less than two weeks away. Mass shootings hit a record high last year, violent hate crimes are on the rise, and police killings continue unabated. The COVID-19 pandemic has killed thousands and disrupted the economy, while George Floyd’s death in police custody has sparked a massive wave of protest across the country. The US faces deep divisions over racial inequality, the role of the police, and economic hardship exacerbated by an ineffective pandemic response. The administration has announced further federal deployments in “Democrat-led cities” like Chicago and Albuquerque to threatening a postponement of the election altogether. In this hyper-polarized environment, state forces are taking a more heavy-handed approach to dissent, non-state actors are becoming more active and assertive, and counter-demonstrators are looking to resolve their political disputes in the street.

Non-state groups are becoming more active and assertive amid increased political polarization and deepening mistrust in state institutions. Since May, there has been over 100 events in which non-state actors engaged in demonstrations (including counter-demonstrations). By cataloging and documenting these events, Strategic Security takes this information and integrated into existing platform called Threat Watch using AI advanced machine learning platforms for seamless situational awareness that provides the broadest possible discovery and evaluation. Early detection of threats helps protect your most crucial assets. Strategic’ s Threat Watch risk analysis benefits organizations by providing quantitative real time data to assess risk levels and subsequent level of security or risk mitigation programs to put in place.

Strategic Security is working with several national customer fulfillment chains, telecom providers, retailers and companies with national-level footprints to prepare them for election-related turmoil. Steps include determining the applicable level of security needed using Strategic's Overwatch Security Solution, securing locations with armed guards, canine teams, rapid mobile CCTV towers to protect them in the event of riots, giving some employees Election Day off and other measures. According to Joseph Sordi, Senior Vice President, Strategic Security Corp, "Planning ahead of the election fallout will help in cost containment and ensure the proper level of coverage as well as officer training in active and passive demonstrators and de-escalation techniques to handle such a confrontational assignment. Over the past 18 years, Strategic has handled well over 500 plus similar assignments with zero insurance loss runs."

These non-state groups include organizations and militias from both the left and right side of the political spectrum, such as Antifa, the Not Fucking Around Coalition, the New Mexico Civil Guard, the Patriot Front, the Proud Boys, the Boogaloo Bois, and the Ku Klux Klan, among others. Overall, over 20 distinct non-state groups have actively engaged in demonstrations this summer.

Affiliated or not, there’s also a growing presence of armed individuals at demonstrations, with many claiming they’re standing by to ‘keep the peace’ if not to openly intimidate perceived ‘enemies.’ At least 50 such incidents have been reported around the country since May 24.

The rise in non-state intervention and violent counter-demonstrations is set against a growing pattern of non-violent hate incidents.

Without significant mitigation effort, these risks has intensified in the lead-up to the vote, threatening to boil over in November if election results are delayed, inconclusive, or rejected as fraudulent. Despite whom wins the election, Trump or Biden, American cities are already on edge. Upset protesters have routinely taken to the streets this summer, facing off with police officers, federal agents and counter-protestors. The anger from supporters of the losing side's candidate, combined anarchists seeking any opportunity to exploit a situation for their personal gain, the threat of domestic extremists who are often aligned with the far-right and far-left, is a combustible mix that can prove to be highly destructive to property as well as deadly.

Police departments in cities that have weathered months of protests are talking about what to do if the violence ratchets up after Election Day, particularly if the results are unclear, close or contested on and after Nov. 3 leaving businesses such as retail giants scrambling to address concerns around how it handles election information, misinformation and civil unrest. Businesses have already experienced the fallout from the police that have taken a hands off approach to anything that may land the officer the subject the the next viral social media post and potentially loss of his/her job or worse prison.

This social movement of de-policing derives in part from the media’s narrative of police misconduct and wrongdoing, making people feel as though it became socially acceptable to challenge and discredit law enforcement actions. A study by the FBI titled “Analyzing the State of U.S. Policing,” asserted that these circumstances have demoralized police officers, causing them to do less—an issue commonly referred to as “de-policing.”

Ever since Ferguson in 2014, de-policing has been defined in terms of “dissent shirking,” where not working serves as an emotionally led form of silent protest. Now in the wake of Rayshard Brooks, Breonna Taylor and George Floyd’s, death, amongst other, the Black Lives Matter, reform and or de-fund the police movement across the nation is creating even bigger risks to all corporations across every industries and the nation as a whole faces since they now feel their supporters that are involved in violent acts are justified.